Teaching Kids About Money Today? It Could Mean Better Relationships In The Future

The Big Takeaway: Kids who learn budgeting and saving habits early in life are more likely to have healthy relationships in young adulthood, studies show.

Everyone knows that learning about positive money habits is important, but could it have a more significant impact beyond just finances? That’s what BYU researchers set to find out in a new study.

The study surveyed almost 2,000 people aged between 18 and 30. They asked them questions to determine whether they learned about money when they were young and how they felt about their relationships over the years.

The results indicated that people who learned about financial literacy from their parents when they were young tended to have better relationships as young adults. 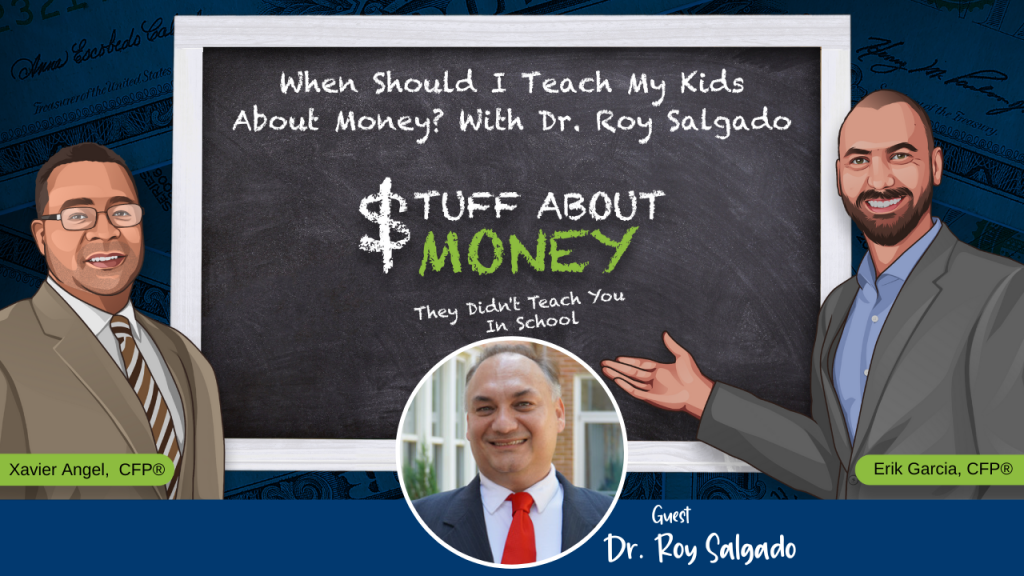 Listen to, Erik Garcia, CFP®, BFA, and family therapist Dr. Roy Salgado discuss how parents can engage with their kids in healthy conversations about money in Stuff About Money: When Should I Teach My Kids About Money? Available on all your favorite podcast channels or on our website.

Dr. Ashley LeBaron-Black, a professor of family life at BYU and the lead author of the study, says the link is likely due to the similarities between healthy financial habits and healthy relationships. If kids understand how to put effort into saving and budgeting to build their finances, they’ll also better understand how to put effort into building better relationships with their significant others.

If you’re wondering what you can do for your kids to help them build both financial wealth and healthy relationships in the future, LeBaron-Black suggests following a three-step model to teach your kids about money:

Kids look to their parents for guidance. If you follow healthy financial habits like planning, budgeting, and monitoring expenses, your kids will try to emulate your example.

“Money” isn’t a bad word. Discuss it honestly and openly with your children so they’re not afraid of it in the future. It might not always be an easy conversation, but the lessons will help your children with finances and relationships in the future.

Watching and listening to you might offer guidance, but letting your kids put the lessons into action will help them stick. Give your kids the opportunity to earn, manage, and spend their money, so they can practice and build positive financial habits for the future.

Are you demonstrating wealth-building behaviors to your kids? Take this test first to learn how your actions might impact financial success here.

Financial Attitudes Form Earlier in Life Than You Might Think

The Big Takeaway: New research shows that children as young as five already have attitudes and feelings about spending and saving money. Even more interesting, these attitudes seem to be independent of the parents’ behaviors. To prevent overspending and irresponsible financial behavior later in life, parents might want to talk to their children about money sooner than previously thought.

As kids, we didn’t have much financial independence. We might have received a dollar here and there to spend as we please, but we didn’t have to make any real money-related decisions.

Because of the lack of experience, it was commonly believed that children didn’t develop feelings about money — specifically spending and saving — until later in life. But that idea may have been incorrect.

New research from the University of Michigan led by Craig Smith, a research investigator at the UM Center for Human Growth and Development, says that children as young as five years old have already established attitudes toward money.

In the study, researchers asked 225 kids between five and ten years of age questions about their emotional reactions to saving and spending money. Based on the responses, children were placed on the “Spendthrift-Tightwad” scale.

“Tightwads” tend to feel emotional pain when they spend, leading to more saving habits. “Spendthrifts” don’t feel negative emotions when spending, so they tend to purchase more than they really need or buy things they may later regret.

After the children submitted their responses, researchers asked the parents to provide independent information about their child’s reactions to spending to verify what the children said during the questionnaire.

Researchers even had the parents complete a survey to determine where they landed on the Spendthrift-Tightwad scale to see if there was a correlation with the child’s data.

The results showed that even at such a young age, children do indeed have attitudes about money and spending. And those attitudes translate to real-life spending behaviors.

If you’re curious about your own spending patterns, take this quick test here!

Even more interesting: there wasn’t a strong correlation between the parents’ and the children’s survey results, supporting the idea that children may develop at least some of their attitudes about money independently from their parents.

The study results showed that kids were four times as likely to be classified as tightwads (as opposed to spendthrifts), which is also true for adults. But the most significant insight is the idea that children develop attitudes about money much earlier than previously believed.

For parents, this means that it’s important to talk to your kids about money early on and establish healthy financial habits — especially if you think your child may be more of a spendthrift. If you wait until your child is a teenager before starting the challenging discussions about money, you’ve already missed several formative years to promote a positive change.

Previous Post: Financial Decisions You’ll Have To Make for Your Wedding with Jessica Burke