There is great debate about what some people believe about the Big Guy and his presence in the Christmas Holidays.  No matter what you believe about the man in red, though, there are at least five things you should consider about the generous spirit of the man and his eight tiny reindeer.   He is, after all, a Christmas legend. 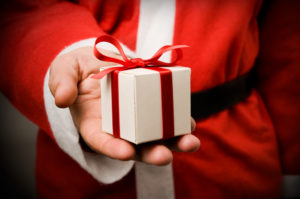 St. Nicholas (the man that was the beginning of the story of Santa) was independently wealthy because his parents died and left him a great sum of money.  As a Bishop, he knew of many people with great needs in his community.  Considering what he had, he could have just kept it to himself.  Instead, he shared with those around him in need.

2. He was quiet about his generosity

Saint Nicholas was not a man that bragged about how he helped others.  As a matter of fact, in the legend of the famous story where he helped three daughters of the same man get married by providing their dowry, he quietly dropped a sack of gold down the chimney.  It got stuck in a stocking drying by the fire.  (That’s why we hang stockings.)  The father was so determined to find out who was helping him, that by the time St. Nick helped the third daughter, he stayed up to find out who had provided for his daughters.  St. Nick begged him not to tell anyone because he didn’t want to be well known.

3. He cared about others

Once, there was a terrible storm off the coast of Turkey.  The sailors feared that their ship would be lost in the terrible wind and waves.  They prayed to St. Nicholas, and then he appeared on deck and calmed the storm.  Today, sailors still carry his statue to the ocean to ask his blessing on the coming year at sea.

4. His cheeks were red because he was persecuted

Even in his attempt to help others and bring joy to those around him, the Emperor Diocletian persecuted him.  It is believed that his red and ruddy cheeks were due to the fact that his face had been burned during that persecution.  Despite all of that, St. Nick never lost his faith, as evidenced by the fact that he still participated in the Council at Nicaea, a formative meeting for the early Christian Church.

Bishops in the third century wore red vestments.  Even the earliest likenesses of Saint Nicholas picture him in his red bishop clothing.  This famous giver of gifts and gold became a saint because many miracles were attributed to him.

Even if we choose not to celebrate Christmas by celebrating the man in red, our hearts turn to thoughts of generosity and gift giving this time of year.  People help one another more at Christmas than any other time of the year.  What will you do this Christmas to celebrate a generous spirit with your money?  Consider this:  there is always someone in need of help.  Share from your abundance!  Learn more about jolly ole St Nick here.

Previous Post: 2 Gifts to Give This Holiday Season to Build Your Wealth

Next Post: 6 Mistakes You Make Setting Financial Goals And Tips On How to Fix Them